Hello everyone! For those that don’t know me my name is Drew Dobbs. I have just recently come back from my fourth trip to Guatemala. Each trip is special but this last one will forever hold a special place in my heart. It was on this trip that I was able, for the first time, to meet the boy I sponsor.

Back in December I asked Melissa about sponsoring a child. She was beyond excited and told me “I have just the boy, he’s my favorite.” As I looked at the page with Eduardo’s picture and information on it, I fell in love with this kid. Turns out he is a month older than my oldest nephew and shares a birthday with my grandpa. Throughout the next few months, I would get pictures and little videos sent to me of him. I could not wait for the July trip to get here.

July 9th 2016 I finally was able to meet Eduardo face to face. That moment of watching him hold Melissa’s hand to running and jumping in my arms will forever be etched in my mind. I remember him saying and Melissa translating that “He never wants to let go and that he would hold on forever.” From that moment on we were inseparable. Melissa said that he would be perfect for me but it was completely from God. Eduardo and I have a lot of the same similarities. We are both competitive in sports and both are OCD when it comes to coloring. Throughout the week we had countless laughs and created a bond tighter than most lifelong friends. The last day, the dreaded last day, at the community was a challenge. Each one of the kids spoke about how much they loved each of us, thanked us for coming and wished us safe travels. Then they gave someone in the crowd a picture they colored and placed a paper heart with their name on it on us. Naturally Eduardo gave me his. From this moment on a lot of tears were shed ha ha. For a little while after the presentation we all played and had a great time. During this time, Melissa took me so I could meet Eduardo’s mother. Eduardo ran and got his coloring sheets so we could color together. After coloring for a bit, Eduardo runs off for a minute comes back, grabs my hand and leads me to Katy Mabry. I found out he wanted to go to the tienda. We get there and he asks me “which one?” He quickly ordered a pastry for himself and I! I am always dumbfounded by the generosity we receive but I was speechless now. We went back to coloring and eating our treats. But like a shift in the wind, the moment came where we had to be leaving. Eduardo knew it as well as I and neither of us wanted to acknowledge it. I was able to corral him and have Paul translate for me. I told him to keep doing well in school, that I would miss him a lot and that I would come back as soon as possible. I stood outside the restoration center with him in my arms and we both bawled. The step onto the bus might as well been a mountain, neither of my feet wanted to take that step. Later that night during debrief, Melissa told me a little more of what Eduardo’s mother had said. She said, “With Eduardo not having a father in his life, I am like that father figure to him!” At this point I didn’t think I had anymore tears left in me but there were just a couple left.

I had gone to Guatemala loving Eduardo already but leaving there I adore him and want nothing less than to give him the world. It’s often said after your first trip to Guatemala you leave a piece of your heart there. Sorry Tony Bennett, I didn’t leave my heart in San Francisco, I left it in Guatemala. 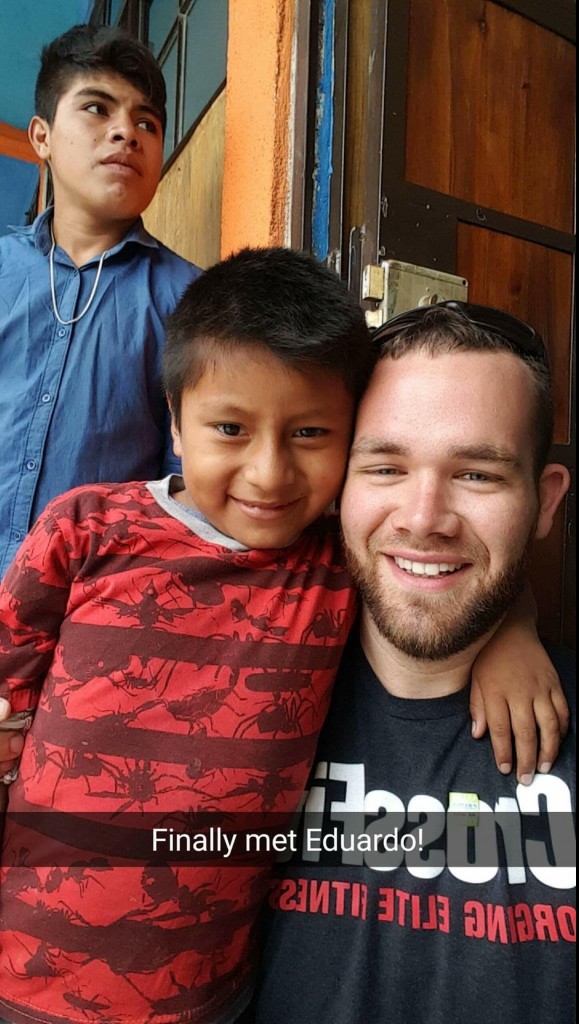